The Quezon City Health Department reports that dengue cases are up by 3,447 cases from January to August, reaching the “alert threshold.”

This singular figure – a result of painstaking manual collation of reports gathered collectively by more than 250 public health nurses and midwives – is a powerful piece of information that should guide the public health management of the vector-borne disease.

However, because health information is manually obtained, collected, and aggregated, it loses its relevance by the time it reaches the desk of health managers. Therefore, it follows that the response mounted is not optimum.

This scenario is not unique to the Quezon City Health Department. Everywhere in the country, health managers struggle with having to rely on outdated or stale data to achieve a semblance of “evidence-based” decision-making.

But with its visionary leadership, Quezon City will be the first city to become an exception.

This was formally sealed with Mayor Bautista and newly-installed UP President Alfredo E. Pascual signing of the Memorandum of Agreement at the Bulwagang Amoranto in this city. 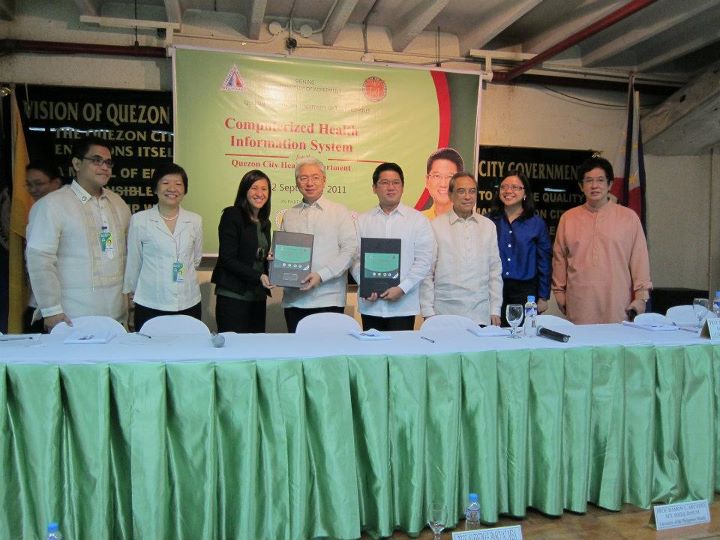 Because of this, the “most populous city in the Philippines” is the first urban city to automate its entire health department.

“We can easily address the problem in a click of a button; unlike before, when we had to call our district supervisors to submit reports,” said City Health Officer Dr. Antonieta V. Inumerable of the Quezon City Health Department.

“Now they can concentrate in the monitoring and easily apply preventive measures.” Inumerable expounds that with the system, QC “can easily track the occurrence of communicable diseases which are of public importance.”

“I dream of a healthier citizenry for Quezon City, “ declared Bautista.“This project is part of my overall plan to harness information technology as a tool to strengthen and secure services to our constituents.”

The automation of QC’s health information system is aligned with the national government’s five-year Philippine Digital Strategy (PDS) 2011-2016. The strategy aims to use information and communications technology (ICT) in promoting efficiency in the delivery of public service, which includes health care.

Bautista added, “This will enable us to better monitor inventories, patients, types of diseases attended to, actual consumption of resources as they occur, as well as to obtain objective measurements of efficiencies in attending to health needs of how many of our poor constituents.”

This vision was concretized and reinforced by the City Council under the leadership of Vice Mayor Joy G. Belmonte as they passed City Ordinance No. SP-2070. The ordinance stipulates for the computerization of all health centers in the city to serve as an “indispensable tool in providing emergency health services to all clients.”

One Health Information System for the Green City

CHITS is to aggregate relevant health information from 5 health districts, 7 lying-in clinics, 3 social hygiene clinics, and 63 health centers without using papers, folders and envelopes. This enables more than 3 million residents to have their consultation and health care services record stored and retrieved electronically.

“Paperless records [save us] papers and envelopes,” expressed Inumerable, echoing the city’s commitment to protect the environment.

Data management, report generation, and inventory system are centralized to facilitate decision-making and planning purposes for the City’s health officers.

“CHITS tremendously unloads the health workers in reporting and spending more time in service delivery,” articulated Inumerable as health personnel usually spend their afternoons writing and recording in the registries and reports required by the City Health Office and the Department of Health.

CHITS also features a PhilHealth module which monitors health services rendered to its members and dependents. It automatically generates reports that are compliant with the DOH’s Field Health Service Information System (FHSIS).

Created by the UP College of Medicine in 2004 with Pasay City, CHITS is “the longest running EMR in the country.”

The National Telehealth Center has since expanded its implementation in up to 50 rural health units nationwide. Recently, Navotas City also signed an agreement for the implementation of CHITS using Smartphones.

The technology is only as good as its user

Central to CHITS is building capacities of the government health staff – CHITS strengthens or even introduces skills in ICT use for health, deepens their appreciation for better quality data, strengthens their commitment in serving the public – mostly the poor who seek care in their health centers.

CHITS introduces the values of FOSS or free and open source software – openness, sharing, accountability, giving back to the community.

CHITS anchors its existence with the support of health personnel such as physicians, midwives, public health nurses, and barangay health workers in the development of the software.

“Our strategy to partner with health workers in the development of the DOH health programs into modules made a great impact in the success of CHITS,” explained Marcelo. “Partnership matters a lot in the process as we have experienced in Pasay.”

With the forging of the partnership between Quezon City and the premier State University, health care delivery is transcended to new heights for its citizens.